Being Human Wiki
Register
Don't have an account?
Sign In
Advertisement
in: Series 1, Series 2, Series 3,
and 5 more

Ghosts normally wear the same clothes each day, they only slightly change. In the pilot Annie however first wears only a T-shirt and after it also a pollover which she wears on top of the T-shirt.

In the Pilot (2008), Julia says to George that she hasn't seen him for 2 years. George has left her direclty after he became a werewolf, so his infection had to be in 2006. However acording to Tully George became a werewolf in 2007 in Stirling Gazette, Scotland, (Tully)  George tells Mitchell in the beginning of 2007 that he has been a werewolf for six months, so it is most likely that he has been turned in 2006, but Tully mixed up the dates. (Bad Moon Rising)

In the Episode Bad Moon Rising Josie, says the following about the first meeting with Mitchell: 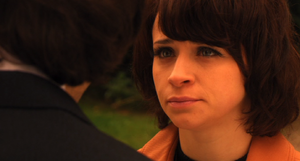 It seems like that they have met in a cafe or pub. In the Episode The Looking Glass however the first meeting of Mitchell and Josie. They first meet in Josies flat and Josie is Mitchells hostage.

Toby Whithouse explains it like this:
"Relationships don't always follow a linear pattern. Boy meets girl. Asks girl on date. Asks girl on second date. She invites him back to her house for adult cuddles. Certainly Mitchell and Josie's relationship is far from conventional. Though it'd make quite a good dinner party conversation. "So how did you guys get together?" "Well, quite a funny story actually..." So I think once Mitchell had returned to her at the end of episode 5, they had to start their relationship again from scratch. I think then they followed a more traditional relationship model. Bear in mind, it was through his relationship with Josie that Mitchell made a serious attempt to kick the blood. That means imposing some kind of order to what was until then an appallingly chaotic and violent lifestyle. Routine and structure would have been absolutely essential. So they literally started dating. Mitchell would have needed a reason to stay on the straight and narrow and Josie would have had to become a mixture of counsellor, parent, lover, carrot and stick. Dating is a quintessentially human habit and so would have served as a kind of occupational therapy as he attempted to renounce his old ways and become more human. So the date Josie talks about in series 1 is, I think, the first date she and Mitchell had once he had decided to devote himself to humanity. Her first date with Mitchell the man."[1]

Vampires getting uninvited into flats[]

Toby Whithouse has an explanation, but it does not explain the scene with Cutler:
"Well, the 'rule' of Vampires having to be invited into a house before they can enter would have its roots in ancient history. Probably from a time when most houses were single occupancies and not split into lots of flats and apartments. Thus the rule would apply to an entire building as opposed to single internal property. Otherwise a vampire would need to ask permission just to move from one room to another. So in both cases, all Mitchell would need to do is gain entry to the block and then he could move around from room to room and indeed apartment to apartment. I expect he and Herrick, having picked up the two doomed girls, would have paused on the doorstep of the block and waited to be invited in. Similarly he will have got another tenant to let him into the paedophile's block and then crept into the specific property. Now of course we could have shown this, but scenes like that will take up screen time that could be better used with jokes about Tracy Beaker."[1]

The official Being Human novels and the BBC Series[]

The novels are very good researched and the most things are written completely right. However there are a few errors:

George getting infected with the werewolf curse.[]

In the Prequel of the BBC series, it is shown that George is on holiday in Scotland when he meets the other holiday guest Andy. Andy is scottish-irish and gets killed by Tully, while George is infected with the werewolf curse.

In the novel George is on holiday with his fiancé Julia Beckett. Julia likes to stay at the hostel, while George wants to take a walk outside. He meets another hotel guest and goes with him. The hotel guest is killed by a werewolf and George is infected. George leaves and never returns. So far it fits to the scenes in the series. However the name of Andy in book was Derek and he was not scottish-irish but american.[2]