Being Human Wiki
Register
Don't have an account?
Sign In
Advertisement
in: Syfy Episodes, Season 1, Being Human Syfy, Episodes

I Want You Back (From the Dead)

I Want You Back (From The Dead) is the ninth episode of season 1 of Being Human (Syfy).

Sally examines the walls in the haunted hospital wing, a forum for lost ghosts to contact one another, noticing a message from a name she recognizes. Meanwhile, Josh and Nora eat together, and Aidan ignores the bullying that poor Bernie is being subjected to. Sally tells Aidan that he should help Bernie, but Aidan refuses.

As Aidan is explaining his tortured soul to Sally, Bernie backs away from the bullies and out into the street, and is immediately sideswiped by a car that fails to avoid him. Aidan tries to resuscitate him, his mother screams and cries, onlookers cover their mouths with their hands, wide-eyed. At the hospital, where Aidan arranged for quicker consultation and a private room, Bernie’s mother and Aidan grieve over her dying son, due to organ failure. She tells Aidan that there’s nothing he could have done, but he knows differently. He goes into a darkened storage room and sobs painfully. 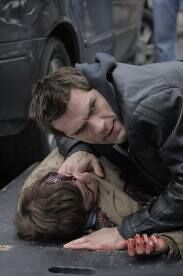 Sally goes to harass her old friend, a TA from one of her college classes that she had a crush on. He’s friendly, attractive and sartorial . Back at the house, Nora and Josh watch a Wuxia film and act stereotypically monogamous. Josh begins to display wolf characteristics (fangs, claws, etc), much to Nora’s horror, and there is a lot of screaming on both ends. Turns out it's a dream. We cut to Josh preparing a delicious egg salad sandwich, while Sally bothers him with the details of her ghost-crush.

The grieving Aidan goes to visit the secret vampire conspiracy, where he starts eating helpless innocents and laughing hysterically, all the while shirtless. Anyway, Josh and Nora are seen eating together at the hospital, and Nora suggests that they attend a work-related holiday party together, prompting some serious awkwardness from Josh. Stuttering and over-explaining all the while, he tries to make Nora understand his apprehensions- but she has no idea of what he’s talking about. Given that they went from having wild animal sex to watching martial arts movies and cuddling, she is understandably confused by his insistence that they ‘pace it down’. Back at the vampire conspiracy warehouse, Rebecca stops Aidan from continuing his self destructive blood orgy.

In a restaurant kitchen, Sally and Nick discuss the perks of being a ghost and have uncomfortable flirtation. It is quickly interrupted by Nick’s ominous coughing and disappearance. On the other hand, Rebeca tries to convince Aidan to turn Bernie, which he adamantly refuses to do, though he does find comfort in her embrace. Sally manages to track Nick down, and finds him drowning upside down in an alley, suspended in mid air, in a levitating pool of water. She looks on in horror until he explodes. Aidan attends Bernie’s funeral, wearing a black suit and dark sunglasses.

Nick explains his weird underwater explosion thing to sally in the meantime, telling her that it’s something commonly referred to as a ‘death echo’, and that he must relive the circumstances of his death every day. Nonetheless, he continues to flirt with her, and they have a ghost kiss that involves both of them disintegrating into sand. Aidan continues to brood, having wisely donned his leather jacket once more, and is greeted by Rebecca, who has a newly vampiric Bernie in tow. Aidan is furious with this turn of events, something Rebecca doesn't quite understand, as she believes that they can have a vampire family together. In the midst of their fighting Bernie runs off and is joined on the swingset by a girl about his age, who Bernie comes very close to eating until Aidan stops him.

Back at the hospital, Josh sees something disturbing- "Doctor Handsome" and Nora are chatting, seemingly about him inviting her on a cruise. Josh becomes characteristically anxious, and begins chastising Nora for flirting with another man, which she thinks is unfair because of his ridiculously cautious attitude as to the progress of their increasingly flimsy ‘relationship’. Aidan comes home from not doing any work at the hospital to find the two neighborhood bullies dead, killed by a vampire. Bishop angrily tells Aidan that their "little heads were nearly chewed off" by a "tiny, vicious creature with fangs", presumably Bernie. He lectures Aidan, adding that this is why children aren't turned, even though he didn't turn Bernie. After Bishop takes off, Josh picks up where he left off and begins berating his best friend; in this heated conversation, they agree that they are, in fact, best friends and that Aidan definitely needs to take his vampire family and leave. He returns to said family at a hotel, and more or less expresses these sentiments to a very stressed out Rebecca, having immense difficulty with her new position as Bernie’s stand-in mother. Bernie can't go to bed because he doesn't need sleep and cranky from hunger, but refuses to have bagged blood because of the taste. It doesn't help that Rebecca is stressed out from hearing the human hearts from the other rooms. Aidan takes Bernie out so he can find fresh blood for him.

At the house, Sally and Nick discuss his ‘death echo’, and he explains that despite the pain it causes him, he is able to deal with it so long as he receives Sally’s love and support. She decides that she has ‘lost herself’ in him, much as she did with Danny, and is tired of compromising her identity for the men she’s with. Josh attempts to explain his hesitancy to Nora by saying that he can't explain it, and she responds summarily by showing him her stomach, which is horribly scarred, commenting that she “didn't always go for the nice guy”. They hug. Aidan takes Bernie into the woods, promising him a deer hunt. They spot a doe, and in case it bolts while Aidan circles around it, he assigns Bernie to chase and hold it down if it does. Instead, he silently circles around back to Bernie and regrettably stakes the young vampire from behind, deeming it a necessary precaution. Returning to the house, Josh finds a distraught Aidan, hands still covered in Bernie's ashes, and sympathetically tells him it had to be done. He leaves him alone so Aidan can privately grieve.

Elsewhere, Marcus and Bishop discuss the success of their secret plan to convince Aidan to murder a prepubescent vampire, revealing that it had been Marcus that killed the two bullies all along in order to frame Bernie...