Being Human Wiki
Register
Don't have an account?
Sign In
Advertisement
in: Supernatural Beings, Males, BBC Characters,
and 9 more

Ivan was an old vampire, and at the age of 237 ,was one of the Old Ones.[1] [2] It is known that he has some history with Mitchell, probably via Mitchell's known association as being one of Herrick's protégés. Nothing is known about his human life, though he relates bits and pieces through casual conversation.

Ivan strongly conveys the sense that appearance and form are important to him. While he does profess disdain for Herrick's megalomania and "vision", he adheres to a code that vampires must stick together, and holds disdain for werewolves (which extends to Mitchell's association with George). He is cultured and urbane, with the viewer getting the message that, between all the sensual activities in which Ivan revels, he has learned his restraint through his need for security travels through both physical places and his long time as a vampire itself.

He is the vampire responsible for recruiting Daisy, who he met in a air-raid shelter during a bombing raid in London in 1941. Daisy flirts with Ivan, and he quickly narrows in on her weaknesses and secret desires. She has a small daughter, Pearl, but admits less than a firm commitment to the child. Ivan shocks her by giving these unmaternal and secret desires a voice, asking her bluntly if she feels guilt because she feels that way about her child, or because she doesn't. He "predicts" Daisy's future life for her, one of increasing disappointment, "settling" and bitterness. He then invites Daisy to come with him, as he throws open the bomb shelter door even as shells continue to fall. Though initially hesitant, Daisy decides on a new life with Ivan, leaving everything, including her child (not present in the scene) behind, Presumably, from that time on, Ivan and Daisy are a pair, and at some time marry, as they refer to one another as "husband" and "wife". Despite their open relationship, Daisy mourns and desires revenge when Ivan is killed in the explosion at the funeral home.

Ivan dies in his attempt to save Mitchell from the explosion, having noticed the bomb activated by cell phone as Mitchell is making his "farewell speech" to a meeting (consisting mostly of Vampires Anonymous members) in the basement of a funeral home; the same funeral home which served as the headquarters of vampire activity in Bristol. Warned by the telltale ringtone, Ivan notices the explosive device and throws himself over Mitchell, protecting him from the worst of the blast. Ivan had just agreed to take Mitchell's place as the "leader" of the group, after initially refusing Mitchell's request. Ivan has never really gone dry, but has agreed to continue as a figurehead, an inspiration of an old, experienced vampire having "taken the pledge." Mitchell has reluctantly allowed Ivan to continue to feed in strictest secrecy. All of Mitchell's pleas for Ivan to take over are airily dismissed by Ivan until Mitchell confesses that he is distancing himself out of love (for Dr. Lucy Jaggett, who unbeknownst to Mitchell, is at least partially responsible for the bombing at the funeral home). Ivan surprises Mitchell by agreeing to take the leadership position, as he has enjoyed the love and companionship of Daisy, and "everyone deserves a Daisy." 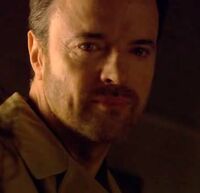 Ivan is known to have no children of his own, and tries to keep out of vampire politics. (He tells Daisy in the fall-out shelter that his "kind" are uninterested in world politics as well.) Implicit through what both Ivan and Daisy say and how they act is their personal "take" on the vampire lifestyle, which is one of constant travel to any place that interests them (Ivan having more depth and culture than Daisy, who is more of a hedonist) feeding/blood and sex (with one another; though Daisy indulges with other partners, which include George.) Ivan is aware of Daisy's behaviour, as he comments to George after retrieving Carl, a vampire friend of Mitchell then on the run, that Daisy "sends her greetings."

Before returning to Bristol, Ivan spent some time with Daisy in Singapore, which is where their characters are introduced in Series 2. Daisy has been interrupted after killing the bartender by the the appearance of Hetty, who is mistaken by Daisy for a little girl (and potential snack). Ivan, who follows Hetty in, reveals the "child" to be one of the Old Ones, her childlike appearance (in a schoolgirl's uniform) quickly belied by her adult voice and request for a drink to cure her hangover. Their easy conversation and Ivan's announcement to Daisy that he "ran into" Hetty displays they have a long acquaintance, at the very least.

Ivan's accent implies a Welsh background. He takes great care of his old Citroën DS. It is one of Ivan's "rules of the car" that since it is his car, he controls the radio and likes Kate Bush music. Ivan shows he has "kept up" with the times, by remarking to Mitchell, when Mitchell announces the need to quickly gather everyone for a meeting, that he has hundreds on his Twitter feed.

The last shot of Ivan is after the explosion at the funeral parlour. He is seen, face up and eyes open (human, not vampiric) on the ground (it appears to be the street) with dark blood pooled behind his head. He appears dead, and certainly, Mitchell and Daisy believe him to be. This sparks Daisy and Mitchell to want revenge and causes many events such as the Box Tunnel 20 Massacre.

Meeting Mitchell after the bombing, Daisy leaves a bouquet of flowers for Ivan.