Being Human Wiki
Register
Don't have an account?
Sign In
Advertisement
in: Females, Dead, BBC Characters,
and 10 more
English

Josie Hunter was an ex-girlfriend of John Mitchell.

Josie met Mitchell in 1969 when he took her hostage following he and Herrick's murder of two women in her apartment block in London. Mitchell spared her life after she confronted him about his lack of desire to kill. Josie subsequently helped Mitchell temporarily go clean and they dated for a while. In 1969 they also came to Bristol for one weekend, they were staying at the Clifton Hotel, as Mr and Mrs McCartney, since Mitchell couldn't think of anything else. Josie stole her mother's wedding ring. They only left the hotel to buy more cigarettes and chocolate. Together with Lucy and Annie, Josie was the only person that Mitchell was truely in love with.

In 2009 Mitchell again encountered her in the St. Jude's Hospital in Bristol where she was undergoing treatment for terminal lung cancer. It was revealed she had married and moved to the city with her late husband upon his retirement. Her husband had died in 2004. She warned George of the vampires' plans after Mitchell asked Herrick to recruit her. She visited Mitchell in hospital following his attack by Herrick and offered her blood (meaning her life also) to help him recover from the stake in his heart; she was found dead the next morning. 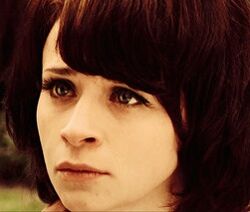 In Series 2 the circumstances of Josies and Mitchells meeting are revealed. They first met in 1969. Josie was Mitchell's and Herrick's hostage. Herrick wanted to kill Josie, but Josie realised that Mitchell didn't. She talked to him and Mitchell let her go!  After it Mitchell wants to leave flowers at her door. Josie just comes around, they talk. Together with Lucy, Josie was the only person that Mitchell could have sex with, without hurting her.