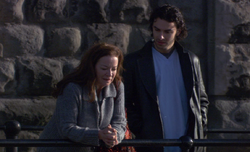 Mitchell meets Josie after he and Herrick have killed serveral women. They are hiding at Josie's flat and are taking her as a hostage. Josie realises that Mitchell, other than Herrick, does not want to kill. She tells him that and makes him think about it. So Mitchell convinces Herrick to let Josie go and not kill her. When Mitchell leaves roses at Josie's house as an appology, Josie arrives. They talk and start a love relationship. Mitchell and Josie are really close. Even when they meet lots of years later at the St. Jude's Hospital, they still have a big connection towards each other. Josie has cancer and will die soon, which makes Mitchell really sad. He tries to convince her to be turned into a vampire, but Josie says no. When Mitchell is sick at the hospital she offers him her blood, so that he is strong enough to stop Herrick.

Josie and Lucy are the only known humans that Mitchell could have sex with without hurting them. Mitchell has always used sex as a weapon, to kill his partners and drink their blood, but with Josie and Lucy it is done because of love.

Retrieved from "https://beinghuman.fandom.com/wiki/Mitchell_and_Josie?oldid=30756"
Community content is available under CC-BY-SA unless otherwise noted.