Being Human Wiki
Register
Don't have an account?
Sign In
Advertisement
in: Females, Humans, BBC Characters,
and 9 more

"The last boyfriend I introduced her to she bit"
―Sam, talking to George about Molly

Molly is the daughter of George Sands's ex-love interest Sam. She is also hinted at being a possible psychic or more specifically a dream precognitive. She has seen George partially transformed due to a mix up over his change and managed to escape unscathed from the incident.

Molly is strangely cold in nature. Her mother, Sam, claims she is acting this way because of their recent hard times. When she first meets George she claims he smells "of dog breath" before shutting the door in his face. Molly also hates people trying to pull the wool over her and her mother's eyes and can see through people easily. She sees through George's white lies about his hobbies and warns him that she has plenty of experience with her mum's previous heartaches and warns George not to cross her. She is aware George is hiding something big but does not push for answers saying he should tell Sam the truth before is comes to haunt him (it eventually does).

It has been hinted at that Molly may posses Psychic powers, but unlike the recently encountered psychics of the show she is unable to sense ghosts or hear their voices. Instead she appears to have precognitive abilities that manifest the strongest in her dreams. This is evident when she has a nightmare about George shortly after they meet. While her mother tries to calm her she claims to have seen George in her dream but "It wasn't George" claiming that the George she saw in her dreams looked like a monster. Initially dismissed as a simple nightmare, the dream eventually comes true when she encounters George fleeing the school after a time mix up for his change. While he does not harm her, Molly gets a clear view of him in mid change looking at her darkly like she describes in her nightmare. 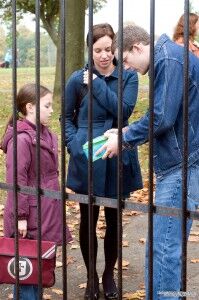