Being Human Wiki
Register
Don't have an account?
Sign In
Advertisement
in: Werewolves, BBC Characters, Characters,
and 19 more
English

"Then this is what we'll remember"
―Nina's last line on Being Human.

Nina was the girlfriend of George Sands and mother of Eve Sands and best friend to Annie Sawyer and John Mitchell.

Not much is known about Nina's pre-series life. In series one, it was revealed that Nina had severe burn scars on her abdomen, which (according to the official BBC Being Human website) were caused by an extremely abusive boyfriend. In series 3, episode 3 she tells George that when she was a child, her mother abused her -- hitting Nina and belittling her. 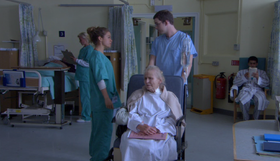 Nina first met George at the hospital where they both worked. At first she was disdainful of George and rude to him, thinking he was an arrogant and blundering dope. Their first conversations included insults toward his intelligence, common sense, attitude toward women, dress sense and personality. She also accused him of slacking off at work. However, she came to realise that she had misjudged him: she eventually had to admit that he was intelligent (first seen by Nina through his ability to speak Spanish, German, Italian, French, Croatian and a tiny bit of Russian) and kind (seen when he visited a patient on his day off because the patient had had no visitors). At Mitchell's prodding, they began a relationship.

Nina disliked that George wasn't being totally honest with her, feeling that he was not investing himself in the relationship due to his inability to tell her about himself. In reality, he simply did not know how to (or whether to) tell her that he was a werewolf and he worried that he would hurt her. Eventually, Nina revealed to George that she, too, had secrets (i.e. the origin of a large burn scar on her stomach) and they were able to agree that, for the time being, their secrets could remain secret.

In the series one finale, it is revealed that Nina received a scratch from George when she came into the room while he was changing. Not wanting to tell George because she believed it would kill him to know the truth, she confided in Annie. Her supernatural status was confirmed when she later transformed in the same room she was scratched in a month before. The brutal transformation left Annie in tears. After getting home from her transformation, she confronted George about the smell of perfume, which he had received from intercourse with Daisy. After an aggressive argument, Nina revealed to George that he had 'given her the curse' and that she was now a werewolf. This sent George into a breakdown and was a serious set-back to their relationship but they soon made up, though things remained tense.

Nina has found out that she is a werewolf. She needed George to support her. George had issues on his own. He needed to deal with the fact, that he has killed. He didn't know where to go with his feelings and started an affair with Daisy. Nina didn't know about the affair but felt a little distance between them. George pushed her away, when she needed him most. To protect him she didn't tell him that he had infected her. So Annie was the first one that Nina told about it. She also asked Annie to be with her during her first transformation, because she was scared. Later during an arguement with George, Nina told George that he had infected her. When George and Mitchell helped Carl, Mitchell's vampire friend, escape the country after murdering his lover, Nina was furious and left the house. She left George a note and broke his heart. She was then confronted by Kemp, who had been looking for a type 3 werewolf. She was staying with them for almost two months, when she returned to George and asked him to go to the CenSSA Main Quarter since Kemp wanted to help them to become human again. George had already started a new relationship with Sam Danson. He wasn't sure that what Kemp had promised could actually happen, but when he and Sam broke up he joined Nina. Annie was coming with them. Then George discovered a note from Tully (the werewolf who turned him) confirming that 'all the werewolves die in the chamber'. They managed to get out of the facility and started to move to a new country house. However Annie was sent to Purgatory by Kemp and wasn't able to join them. Nina felt guilty about it, since she was the one who introduced them to Kemp. So she tried everything to get Annie back. She was ordering Lucy Jaggat's book, searching for hints and she also tried to reach her. However when Lucy actually showed up, Nina was so angry that she asked Mitchell why he didn't kill her.

After relocating to Barry, George and Nina had sex while in werewolf form when they were forced to lock themselves in the same room, resulting in Nina becoming pregnant due to her birth control pills not working on her werewolf

body chemistry. Although she contemplated aborting the child due to her own abuse, Nina eventually decided to keep the baby after a meeting with the zombie Sasha, who reflected as she died that her only regret was not having done more with her life. Despite her fear about the trauma of the transformations harming the child, the pregnancy appears to have coped with Nina's transformations, but the fetus's development was still accelerated, appearing to be almost sixteen weeks 'old' after only eight weeks of pregnancy.

Later, Nina is confronted by Herrick- his memory now restored- who reveals that he remembers what George did to him and wants him to suffer by hurting Nina. Herrick pretends to let Nina go, only to stab her non-fatally, which heals days later due to her werewolf abilities.

A week after giving birth to her daughter Eve, she is murdered by vampires, by being beaten to death with baseball bats, on the orders of the vampire Old One Griffin. Her death is later avenged by George. She was later referenced by ghost Alfie Kirby, who claimed that Nina had sent him to help the new trinity look after Eve because she couldn't come back herself, but this was soon revealed to be a lie; Alfie's knowledge of Nina was simply the result of information given to him by Eve's future ghost. In the final episode of Series 4, Annie and Eve both die whilst saving the world, which turns out to be Annie's (secondary) unfinished business. After Annie's door appears both Annie and Eve cross through purgatory where they meet Nina who is with George and Mitchell. 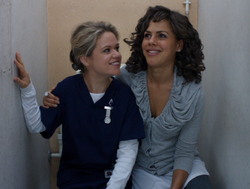 After becoming a werewolf Nina gets a lot of other supernatural friends, such as Annie, Tom, Adam, Mitchell, Herrick and the zombie Sasha. Annie becomes her best friend; she was the first person who got to know that Nina was infected with the werewolf curse.

Apart from the supernatural friends it is known that Nina is a friend of Sasha. Sasha is a nurse who works together with Nina at the St. Jude's Hospital. Nina and Sasha are meeting each other in their freetime.

The informations about Nina's life, when she is not around George, Mitchell or Annie are very limited. Before Nina moves into Georges room she lives in her own flat. In her flat are a lot of books, so Nina might like to read during her free time. A huge amount of the books are specialist books, so it seems that Nina likes to to educate herself. Furthermore she also likes to meet up with her friends, like Sasha.

Nina has appeared in 19 episodes in total.