Being Human Wiki
Register
Don't have an account?
Sign In
Advertisement
in: Being Human BBC, BBC Episodes, Episodes, Series 5

No Care, All Responsibility

No Care, All Responsibility is the fifth episode of Series 5 of Being Human, and was first aired on 3rd March 2013.

Tom falls for a damsel in distress called Natasha (Kathryn Prescott), when she runs into the hotel looking for a safe heaven. But Natasha comes to the attention of Hal for a darker reason, when she offers him a way to control his bloodlust and prevent him from killing innocents. Meanwhile, Alex is positive there’s something suspect about hotel resident Captain Hatch. But the more she investigates, the deeper into danger she gets.

Alex: [To Hatch] "Oi! Wrinkle-tits! I don't care if you've got enough viagra to float the Titanic, no-one is doing any rising on my watch."

Alex: "What are you?"
Captain Hatch: "I'm only the fucking devil, sweetheart." 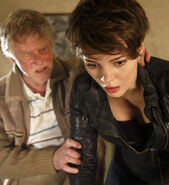 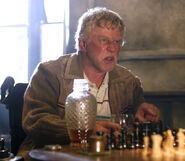