Being Human Wiki
Register
Don't have an account?
Sign In
Advertisement
in: BBC Episodes, Episodes, Being Human BBC, Series 5

Patsy: "Are you coping without Sophie?"
Captain Hatch: "Oh, poor girl. I keep thinking to myself... was it something I said?"
―Captain Hatch makes an ironic statement

Alex: "Decky used to look up symptoms online all the time, except he couldn't be bothered to look up the diagnosis. There was this one time, he said that he couldn't go to school, because he had just started the menopause."
Alex remembering her younger brother: "{{{4}}}"
―{{{5}}}

Sticks and Rope is the second episode of Series 5. It was originally broadcast on 10th February 2013.

Alex is seen on the last day of her life at a carnival with her brother. She must leave for her date with Hal, but promises that they will return tomorrow. At the Barry Grand Hotel she despairs that, as a ghost, she has nothing to do. Back home, Alex discovers that she’s not the only ghost haunting Honolulu Heights. A small child named Oliver reveals that he has been quietly haunting it since the late 1800's. He orders them about and fakes asthma attacks when he doesn't get his way.

Meanwhile, Patsy the manager of the hotel has been given an idea by Captain Hatch supposedly to help morale, after the recent suicide: an Employee of the Month Competition. Hal is uninterested, but goaded by Tom, agrees to go head-to-head against him, much to the delight of Captain Hatch, who feeds on werewolf/vampire conflict. Patsy favors Hal and finds only fault in everything Tom does. Finally, she tries to fire Tom, but Hal threatens that he will leave as well.

In the supernatural archive, Mr. Rook is hatching a devious scheme to save his department, one that involves newly made vampire Crumb. He arranges a visit between an unfed Crumb and his sister. Hoping the inevitable bloodshed will convince his supervisor that his department is too important to close. Crumb kills both his sister and his young niece, who had come along, but the supervisor will lose his own job if he doesn't close the dept. Alan, an employee of the dept decides he wants to be recruited as vampire and frees the distraught Crumb, who riddled with guilt seeks Hal's guidance.

Aside from Richard Wells' original score this episode features the following songs: 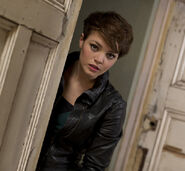