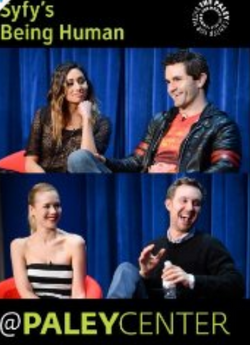 Syfy's reimagining of the popular British series follows three twentysomething Bostonians as they navigate the demands of contemporary urban life, which in their case is a bit harder due to certain existential complications: one's a ghost, one's a vampire, and one's a werewolf. The series has won praise for explicating the humanity of its characters, in addition to their preternatural qualities.

Retrieved from "https://beinghuman.fandom.com/wiki/Syfy%27s_Being_Human:_Cast_%26_Creators_Live_at_the_Paley_Center_2013_Video?oldid=23768"
Community content is available under CC-BY-SA unless otherwise noted.