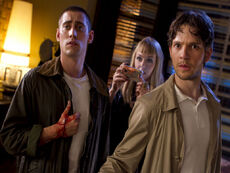 Tom: "I like your tights, they make you look like a bee and I like bees."
Michaela: "Are you coming on to me?"
―Tom attempts to chat up Michaela

The Graveyard Shift is the third episode of the fourth series of the the UK Being Human which was first broadcast on 19 February 2012.

In order to function properly in the modern world, Hal reluctantly starts working at the cafe with Tom. Frictions between the two ensure that the morning does not go well. Meanwhile, Annie develops her edgy alliance with Regus who convinces her that the vampires pose a serious threat to baby Eve and that according to legend the greatest part of this threat is a mysterious "Nemesis" - a man with a burnt arm.

In the cafe backyard, Fergus tempts a discouraged Hal, offering the leadership of the Barry vampires. Hal is ambivalent, but agrees to let them storm the cafe that night and kill Tom. Fergus then encounters and menaces Annie and Eve in the park, prompting Annie to lay plans to flee Barry in the company of Regus. Back at the cafe, Hal begins to bond with Tom as the duo pursue normality by attempting to chat up the nearest available woman: the prickly, pretentious pseudo-Gothic poet Michaela.

By evening time, Hal has changed his mind about his loyalties and when the vampires attack the cafe, Hal helps Tom escape back to Honolulu Heights (bringing along Michaela, who has become caught up in the action and is delighted to find her fantasies are real). At Honolulu Heights, they find Annie and Regus preparing to leave: as the vampires attack, Hal pretends to side with Fergus but then betrays and stakes him. Fergus' remaining vampire sidekicks are killed in the following melee, and Michaela is fatally wounded. Regus makes her into a vampire (in part, so that he can have a companion and lover of his own) and the two leave together. Reassured by Hal's display of loyalty and his growing friendship with Tom, Annie decides to stay in Barry.

Community content is available under CC-BY-SA unless otherwise noted.