"Annie, George, Mitchell, Nina, the two of you. What none of you realised is that the desire to be human is to be it. To want it is to have it. So no, you're not wasting your time, Tom. You've already won."
―Hal Yorke

The Last Broadcast is the sixth (finale) episode of Series 5 and is also the final episode of Being Human. It was first broadcast on the 10th March 2013.

The supernatural trinity has been broken.

There is little left of Hal’s humanity . Having feasted on human blood and recruited an army of vampires, he’s ready to return to his hedonistic and debauched days.

Tom is set on revenge and has returned to his default setting – vampire killer, with one vampire in mind.

Alex is trapped in a hellish prison by Captain Hatch.

Unbeknownst to them all, Captain Hatch is no longer wheelchair bound and weak: he’s the regained his strength and is determined to cause as much chaos, death and destruction as possible.

In the thrilling series finale Hal, Tom and Alex do battle with the Devil (Phil Davis) in order to save the world, but at what price to their own humanity? 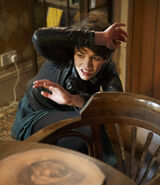 Add a photo to this gallery

Retrieved from "https://beinghuman.fandom.com/wiki/The_Last_Broadcast?oldid=15114"
Community content is available under CC-BY-SA unless otherwise noted.