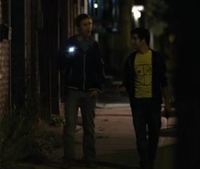 After Aidan has organised a neighborhood meeting, the neighbors start to organise a neighborhood watch. They want to fight a sprayer and make sure that they keep their neighborhood safe. Aidan has the idea that they should go on partrol together in teams. April organises the teams. Josh takes part even though he doesn't want it. At the first night, Aidan doesn't come to the neighborhood watch, so Jesse takes over for him however nothing happens. A night later, Josh smells the spreyer with his werewolf sense of smell. He catches the spreyer. The police takes care of it.