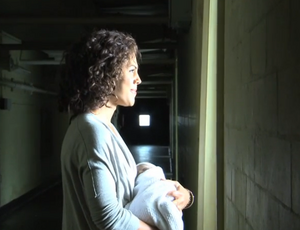 The Other Side is the place where the dead cross over to upon death. Its appearance alters to fit the individual. It is home to the the Men with Sticks and Rope and presumably the corporeal forms of demons.

For the most part the other side does not interact with the living world except to open the doorways for departed souls and ghosts who have completed their business. If a ghost refuses to cross over the forces of the other side will violently hunt down the spirit by influencing the mentally unbalanced to create doors to pull the ghost through. The other side is capable of communicating with the living side through electronics ie. televisions, radios etc. Agents of the other side take the form of television personalities such as Terry Wogan to influence the weak minded of the living into carrying out their machinations. Normally agents of the Other side can not enter the living world in their true form; resulting in their use of electronics and the weak minded. Despite this powerful assistance can weaken the barriers between the worlds allowing them to enter the living world. If the door is closed, the barriers reseal.

Purgatory is a section of the other side introduced in Series 3. It is the area where the now deceased view their past memories in the hope it will give them perspective as to whether they will end up in either Heaven or Hell.

Retrieved from "https://beinghuman.fandom.com/wiki/The_Other_Side?oldid=30951"
Community content is available under CC-BY-SA unless otherwise noted.