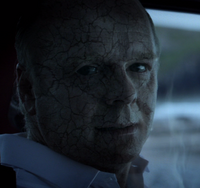 A wooden stake is the most useful weapon against vampires in both series. It will destroy the vampire completely. While a vampire from the BBC universe can be resurrected after a werewolf attack, he or she can't be resurrected after being staked through the heart with a wooden stake. When a BBC vampire is staked, it will turn grey. After that it will turn into dust and vanish. When a Syfy vampire is staked, they appear to burn and then turn into ash. Countless vampires have been killed by a wooden stake. These are the more well known: